Day two of our journey towards achieving an organised community for better citizen participation and engagement took us to Thayu Location which is part of Nakuru North sub-county. Thayu location has a population of approximately 11,700 people making up about 2,300 households as per 2009 national census. The location is divided into 2 sub-locations ie Wendo sub-location and Thayu sub-location. Thayu location is administered by Chief Paul Ngige and Assistant Chief Samuel Ichoho. 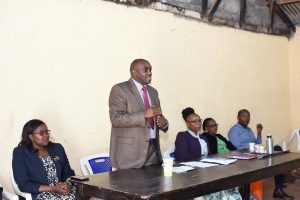 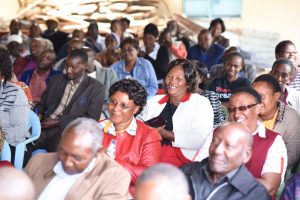 Women formed at least 30% of the community leaders nominated. 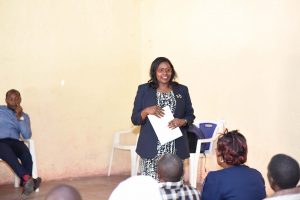 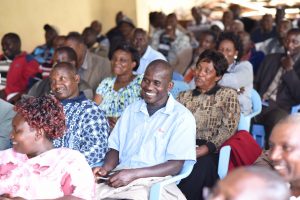 There were many light hearted moments as the engagement continued. 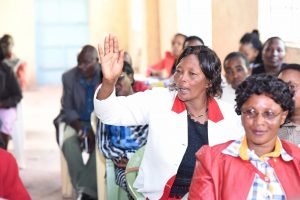 Unlike many community meetings, women spoke up on many of the community issues 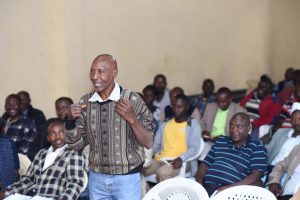 The community had much to say as part of the discussions

The main economic activity in this location is farming and quarrying. Most of the farming in the area is done on huge tracts of land. They cultivate crops such as wheat, maize, tomatoes and practise dairy and poultry farming. There is also a milk processing plant that produces value added milk products like yogurt which is marketed locally and around the country in major cities.

One of the lessons learnt during the meeting was that one of their roles as community leaders is to help the community attract investors to there areas. Which is evidenced by the milk processing plant. Through such an investment, the community is empowered through employment and support for farmers in the region who have a ready market. Given the quarrying activities in the area, we noticed most of the structures were permanent, since they can easily access building blocks at a subsidised price.

The facilitators led by the Assistant County Commissioner 1, Ms. Monica Ithatwa, were very impressed by the 100% turnout.This can be attributed to the strong relationships the area chiefs have built with the community leaders.This speaks to one of the lessons we have learnt, that where there is a good working relationship between the chief and the community leaders, there tends to be good momentum of development and security measures are considerably stronger. We noted that the chiefs were very organised on their end and there were less distractions during the meeting compared to Kiamaina Location.

Of the 90 community leaders who attended the induction, around 30% comprised of women leaders and 27% were below 45 years.The lack of youth leaders was also felt. This could be because they shared the same views as their counterparts from Kiamaina Location, that the youth were not yet qualified to be leaders. It was mentioned that majority of these leaders were retired teachers and this was evident throughout the sessions in the way they eloquently expressed themselves in English and their level of engagement and interaction was of a high level. The women representatives were very vocal during the sessions.

Todays sessions included: Leadership and Conflict resolution, Child Protection, Education and Adult education. The participants were very engaging with the facilitators, they asked a lot of questions which led to discussions such us; how can the retired teachers contribute towards adult education, how to handle defilement cases and how to preserve evidence in such cases. Under conflict resolution they held discussions on how to handle conflicts regarding land disputes, especially in cases involving people who had recently moved to the area.

We observed that the community leaders were forward thinkers because they were really interested in data collection so as to improve their farming activities. If the community was to collect data on any aspect of their lives they would do so with ease given their high appreciation for data and the role it plays towards achieving development. Having worked with many communities, we would say that it is not common to see communities expressing such interests.

The Deputy County Commissioner, Mr. Mutua Kisilu graced the meeting and encouraged the leaders to take advantage of such trainings as this was an avenue to learn from experts, hence generating new ideas for development in the community. It was evident that these cohort of leaders was very committed in driving development agendas in their communities and leading their people in the right direction. They acknowledged and applauded the DCC’s efforts for arranging such an informative meeting for them as this was the first time they were being involved in matters relating to governance. They also noted that the DCC’s predecessors had never involved them in such initiatives.

The meeting was closed by the area chief who appreciated their commitment and dedication towards bettering their communities. He also reiterated that as Nyumba Kumi leaders they were the gateways for citizens engaging the government in development and security matters. The meeting ended with a word of prayer from one of the leaders.